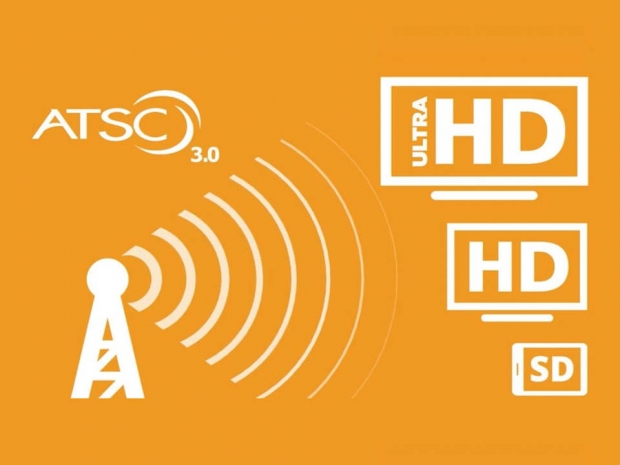 During the media day at CES, we attended a panel on the future of over-the-air TV broadcasts using a significant revision to the current delivery interface called ATSC 3.0.

The Advanced Television Systems Committee, which is the group that regulates over-the-air, cable and satellite digital TV broadcasts, is gearing up for a third revision of its transmission standards that will include support for 4K UHD, high dynamic range (HDR), high-frame rates (HFR), and wide color gamut.

But to digital media groups and industry executives, the real focus in this next revision will be delivering mobile video streaming to a much wider audience than ever before. This includes the ability to watch over-the-top subscription services by using over-the-air transmissions without reaching into a consumer’s wireless data plan. And of course, the second focus will be on gathering mobile advertising revenue through more efficient approaches, mostly targeting younger audiences and millennials.

Back in 1996, the FCC adopted the first revision of ATSC as a way to transmit digital television content over terrestrial broadcasts (OTA), cable and satellite networks. Roughly 18 years later, the commission realized that internet-based streaming services were quickly shifting viewership away from usual delivery methods, mainly because two-way interaction and non-real time content became more appealing to consumers. Two years ago, the ATSC 2.0 standard was then adopted to bring these elements into the broadcast mix as traditional cable subscriptions began to fall by more than 250,000 during the previous year. Since then, over-the-air broadcasts have been able to include video-on-demand (VOD) services, better programming guides, and the ability to record to a DVR, bringing the traditional TV experience up to speed with cable and satellite services.

While ATSC 2.0 was an introduction to features like internet connectivity, advanced coding technologies, conditional access and audience measurement, ATSC 3.0 now takes this a step further by providing even more IP-based services, bandwidth efficiency and compression performance than over the next decade. The digital TV industry realizes that younger audiences have largely shifted towards mobile content consumption at a current rate of about 50 percent and counting. It now wants to engage this audience as tightly as it can to squeeze out higher profit margins through some all-too-familiar targeting advertising techniques.

Not backwards-compatible, but dongles may be subsidized

The ATSC 3.0 standard breaks from existing revisions because it needs new hardware to be implemented, either in the form of new TV chipsets or compatible receiver modules in mobile devices. To help increase the initial adoption rates, however, some industry leaders expect Chromecast-like dongles supporting ATSC 3.0 transmissions to be subsidized by broadcasters and sold to consumers at affordable retail prices. 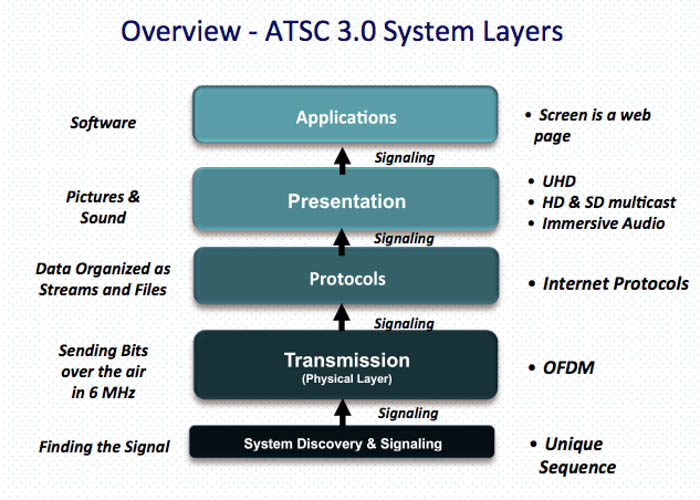 Over the air throughput is also expected to become about 30 percent more efficient, moving from 19.3Mbps up to 25Mbps on a 6MHz channel. The standard also brings support for recent codecs including H.265 / HEVC along with 22.2-channel audio and additional codecs from Dolby, DTS and the MPEG-H audio alliance. In October 2015, the standard was rated by the law firm accompanying an IEEE field test as “significantly improved mobile reception capability compared to ATSC 1.0 A/153 Mobile DTV,” and “equal or better coverage” versus the original ATSC 1.0 A/53 digital TV standard.

ATSC 3.0 will enable subscription video services without a data plan

During the panel we attended at CES, the moderators described ATSC 3.0 as a “mobile-first standard” that will work simultaneously with IP-based streaming. The other major feature - called conditional access - will let viewers to access over-the-top subscriptions such as Netflix, Hulu, Amazon Video through over-the-air 6MHz transmissions rather than having to use their data plans, resulting in a dramatic increase in the capacity to deliver mobile video content over the new few years.

The original appeal of broadcast television in the 1950s was that it brought the outside world into the living room and opened up a world of characters, stories, personalities and information that the previous generation never thought possible. Although access to content has significantly expanded since that time with cable and satellite, the tradeoff to open access arrived in the form of unnecessarily high costs from broadcast providers that eventually led to the current cable-cutting migration brought along by the arrival of cheaper IP-based over-the-top services. Now, the industry wants to revitalize the original appeal of open access by capitalizing on the flexibility provided by IP streaming.

In an open letter from October, ATSC Chairman Rich Chernock wrote, “Today, people want the capability to watch nearly anything they want, on any device, wherever they are—with content delivered over the air, over cable or satellite, via the internet or locally stored. It is clear that the broadcast industry must evolve to accommodate this desire.”

Last modified on 10 January 2017
Rate this item
(0 votes)
Tagged under
More in this category: « The next steps for 4K film and broadcast delivery Turn off your telly if you use Alexa »
back to top